BOOM TOWN: Why The Property Market Will Boom PART 1

In my mind history is set to repeat.  I think we will have a property boom in the coming years.  In this series I will explore the reasons why I have come to this position.  Most of this can be boiled down to pretty simple stuff and hopefully I can distill it down to simple, easy to understand stuff.

Unless you’ve been living under a rock in 2019 you could not have missed the apartment saga.  Apartment owners are being forced to fork out shit loads of money for apartments that have been constructed with some serious defaults.A

It all started with the Opal Tower.  It had taken years to get here.  Years of politicians slowly but surely deregulating on behalf of their friends in the construction game.

Opal Tower residents were left in temporary accommodation after engineers deemed certain apartments not safe to occupy.  Just a few months later it was the Mascot Towers almost a stone’s throw away.  Since then contagion has set in.  A number of apartment buildings have been identified with major defaults.

An ABC investigative report from August has some serious claims.  Of all the apartments built since the year 2000 most have defects.  It’s not unusual for the media to ham things up but this problem will get worse before it gets better.

Victorian Premier Daniel Andrews promised to fork out $600m but it looks like school play money compared to what’s required.

Anyway, this is going to have a disastrous effect on apartment prices.  Especially since a large proportion of all apartments have been built between 2000 and now.

You might think this will drive prices down.  Yes, you would be correct.  It will drive those apartments down.  Unfortunately, it also drives down the overall housing supply.

But people still need places to live, the demand is still there.  That demand will go toward the apartment blocks that buyers can be confident of the construction quality.

In any market, whether it be property or not, when demand outweighs supply prices will rise.  This is economics 101, you were probably taught this in school.  When the market is prepared to pay more for an apartment it means the developer can pay more for the land.

Once land increases in one suburb it soon spreads to the next closest suburbs.  It causes a ripple and its why suburbs on the outskirts peak long after the inner-city suburbs.  Add our record population growth to the mix and you have a recipe for strong demand versus low supply.  That is what you get in a boom market.

If you take a step back and look at this from an investor point of view there are some things that stand out.  Renters will be prepared to pay more for good safe apartments.  Another thing is there will be more competition due to less safe apartments which will further drive up rents.  Higher returns mean a higher asset price.  In other words, investors will be prepared to pay higher prices.  Investors dominate the apartment housing market so this just pushing the market up from a different angle

I have not heard this idea mentioned in the media.  People want to explain something like a property boom on a couple of basic factors.  The reality is there are many factors that all play off each other and I see this future apartment housing shortage as something that will help push the market to boom times.

That’s for Part 1 of the “Why The Property Market Will Boom” series.  Tune in next time for when I explain The Dubai Effect.  I’ll give you a clue.  It pushes the supply of money, I’ll be mentioning frequently on how the supply of money and credit influences the value of land.

We’re already seeing it hit the top end of Melbourne and Sydney markets. 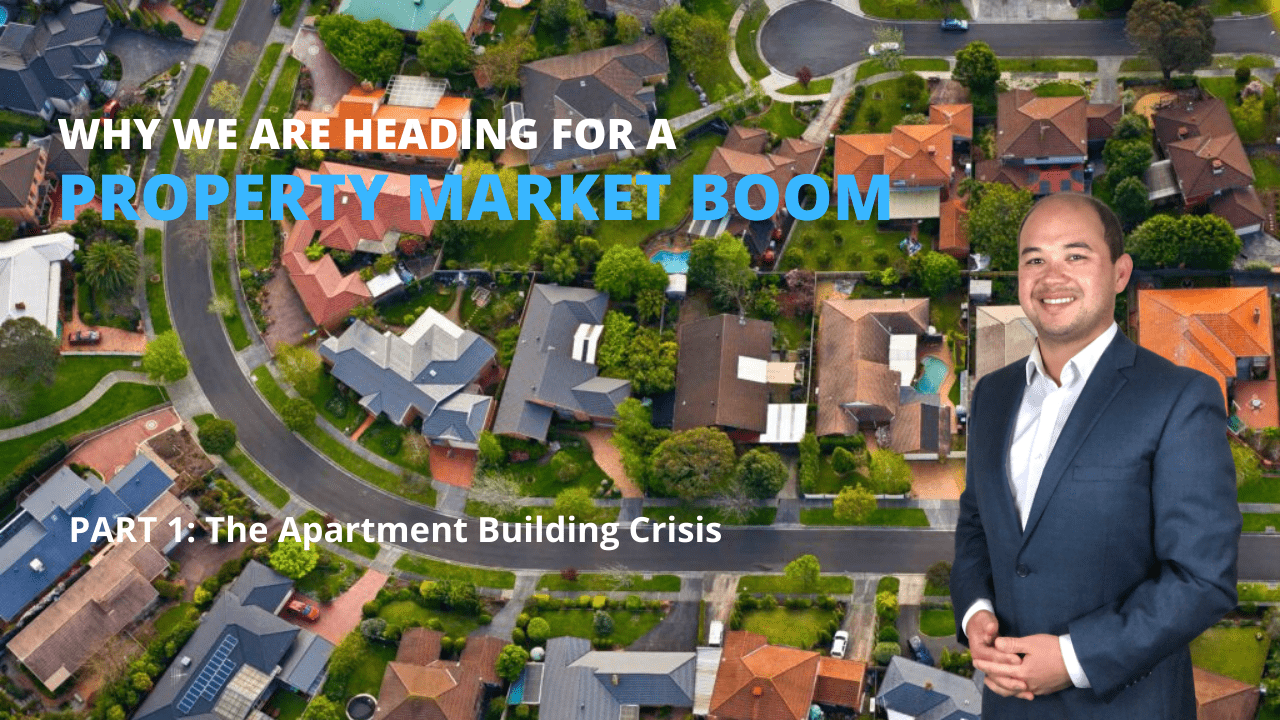 Article Name
BOOM TOWN: Why The Property Market Will Boom PART 1
Description
The next property market boom is just around the corner, in this series Will Bell discusses the contributing factors.
Author
Will Bell
Publisher Name
Will Bell Mortgage Broker
Publisher Logo