BOOM TOWN: Why the Property Market Will Boom Part 2 The Dubai Effect

Why The Property Market Will BOOM: Part 2 The Dubai Effect

I first heard of The Dubai Effect around 4 years ago. It was a conference where demographer Bernard Salt had given a 45-minute presentation. He explained where we are and what direction our nation is headed in the context of being in a room full of mortgage brokers.A lot has moved under the proverbial bridge in 4 years.

Let me take you back.

APRA were in the midst of trying to stem an investor led housing boom. There were fears that there was an interest only lending cliff to be seen because of too many 5-year interest only loans. Apparently, this was to rear its ugly head in 2019-2020 with the risk of creating an oversupply in the market.

The idea was that not enough investors would be able to refinance their debt and would therefore be forced to sell their properties. Prior to the APRA changes borrowers could roll over their interest only loans for another 5 years without be assessed as to whether they can afford it.

We were in the midst of a housing boom. Especially in high rise investments. That part of the industry has had its fall from grace. The Mascot Towers shone a light on the dodgy building standards and lack of regulations.

Dodgy building practice didn’t cause the boom on the way up however. That was where The Dubai Effect played an important role.

The Dubai Effect takes place in the Middle East. It’s a pretty simple concept – when shit hit’s the fan, money gets moved to Dubai. It gets moved to Dubai because it assures people that their money is safe. It can’t disappear through corruption or war; the money is held in US dollars and whilst there is a lot of uncertainty in the Middle East region people know their money is safe in Dubai.

What is interesting and what Bernard Salt demonstrated was that during the GFC and its aftermath the same sort of thing happened in Australia. You have to bear in mind that we’re not little old Australia anymore. We are a major economy. We are also known for low corruption within our system and a relatively steady currency.

Four years ago, our high-rise property market was “going off”. And much of this demand come from our neighbours in Asia. Throughout this period there was a heightened fear that China’s golden run of growth was over. This fear came from both inside and outside of China and a result a lot of money came to Australia.

At this time Australia not only offered great stability for people’s cash but also interest rates that were deemed as high to the rest of the world. Yes, a lot of cash was held here by overseas people. But these people also brought assets because why not right? Why settle for 4% on deposit when the apartment market in Sydney was putting on 10%+ growth year on year?
Interestingly, shortly after China started putting real efforts to keep the money in China because their economy had problems of its own. This was well timed with the downfall of the market too.

Another example of The Dubai Effect on the Australian property market could have possibly been seen last year. Unless you’ve been living under a rock you would have noticed the little saga going on in Hong Kong. Basically, China are trying to increase their power over the former British colony. The rich people do not like this uncertainty and as such they have been looking to move them and their money elsewhere.

If you look at the timing you can correlate that to when the Australian property market started booming again last year. Not all of the market was booming though, just the expensive part of the market. The types of properties rich people buy when they’ve moved all their money from overseas.

This rise in the market last year gets attributed to interest rate decreases and APRA releasing the hand break on lenders making it much easier for people to borrow more money. If this was true then the whole market would have seen a lift not just the high end in Melbourne and Sydney.

The Dubai Effect is not very well understood. It is the law of supply and demand. If there is a greater supply of money in the market then people will pay more for the goods in the market. It’s very simple.

I honestly think we will see more uncertainty and more of The Dubai Effect in action in the coming years. When you mix it up with the other factors it makes a recipe for another massive boom. 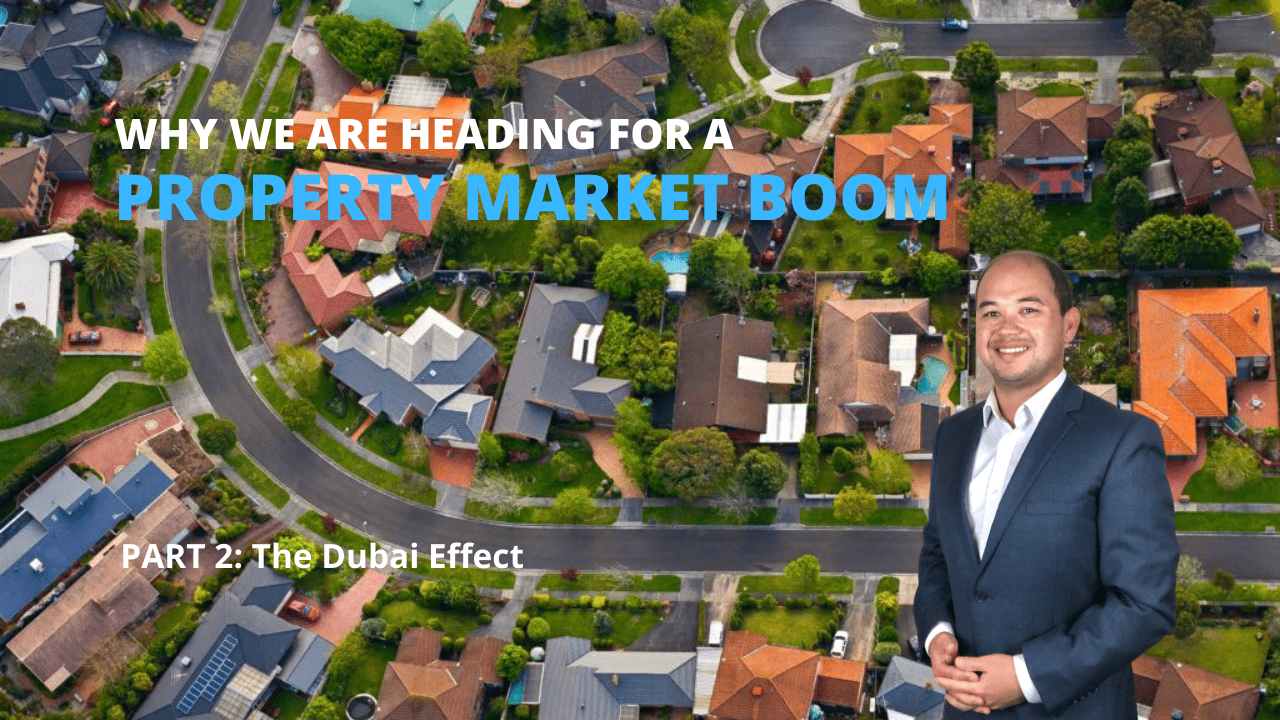