Hey guys, hope you’re all living through lockdown number four and surviving out there. Yeah, it’s getting thin for everyone, myself included. But yeah, hope you’re going well.

Without further ado, let’s jump into this month’s update. So as per usual, I’ll jump through the homeland news, property, news and news on the broader economy.

I’m forever trying to communicate to my clients, the understanding that there is a risk in buying property, it doesn’t just keep going up. If you look at Japan, Japan still hasn’t come back from its 1989 highs. So people think there are no risks. If you think there are no risks, then you are at risk yourself. So let’s jump into the news.

APRA Ask Lenders To Cut Back On Risky Lending

The first part is APRA asking banks to cut down on risky lending. So there has been the past couple of months, a bit of news in social media and other sorts of influences, basically commenting that certain lenders are allowing borrowers to borrow over six times their income. So it’s called the debt to income ratio. So if your income’s 100 grand, in the past, borrowing six times what your earnings are, has been seen to be kind of around the top, it’s been seen to be kind of high, and the last three or four years APRA have actually put in place certain measures where the debt to income ratio shouldn’t really go over six.

With that, some lenders actually have been approving loans with a debt to income ratio above six. So this article is kind of a bit scary to people. But the basically APRA have said because house prices are going up so quick they’ve asked lenders to kind of review risky lending. So as a result of this Commonwealth Bank is basically adjusted how they assess home loans and made it a little bit difficult to access those high-risk loans.

I’ve actually had a few people and there’s been a few people on social media thinking, Oh, no, the home loan interest rates are gonna go up borrowings getting hard. Again, I wouldn’t make those assumptions just yet. And my assumptions are actually just saying that when things going to continue to get easier, and rates are going to continue to go down. So I haven’t seen any evidence for me to change my opinion on that yet.

The next thing I wanted to show you is a basic one, but it’s an old one, it’s called the fortnightly repayment method. So I’m just going to bring up he a basic loan calculator.

Let’s put in 500 grand loan which is about average these days, sadly, interest rate I’m going to put in 5%, because 5%, the average rate that you’re going to get over a long period of time, and down here is just gonna be a few numbers, so explain them, they’re very easy to understand. This column here is your normal column for a standard 30-year loan. So your payments are $2,694. And your interest is $466 grand, so you’re paying about double what you’ve borrowed in interest over the period.

All the fortnightly repayment method is taking your monthly repayment, cutting it in half, and paying that every fortnight so every fortnight is obviously 14 days, but you’re paying half a month’s which is about 15 and a half days so you paying a day and a half extra, every repayment. So just by doing that, what you actually do is you pay the loan off for years and nine months earlier. And your interest saving is $85,820 which is a massive amount so people don’t understand how simple these things on how much you can actually say.

Another way I suggest people look at it is well let me bring my calculator up here. I hope you can see this on the screen is your saving any $85,820 but you’re actually more ahead because you’ve been making those extra payments. That you haven’t really noticed because let’s face it, one and a half days extra every fortnight – you’re not going to notice it coming out of your account.

But I want to do a calculation to show you how far you’re actually ahead. So four years and nine months is 57 months. And you’re actually, you’ve actually paid not paying that off 57 months earlier. So let’s go 57 times $2684. Let’s just round it off to that. You actually had $153 grand over that period of time. So that’s including the extra payments you’ve made plus the interest. But it really shouldn’t matter, because that’s how far you’re ahead. So that’s an oldie but a goodie.

Moving on to probably market news, housing commitments are up Surprise, surprise, commitments up. And I’ve just stolen this, I shouldn’t say stolen, and used this graph from the ABS. Proven net. So it’s pretty little graph here. I think I’ve actually shown this one before.

But the middle one here, owner-occupied excluding refinances. So that is people buying houses to live in, has shot up massively. So you can see here, June 2020, it was 13 billion, and March 2021. It’s 22 billion.

So that’s up about 50%, from June 2020. Which is really interesting, because if you think during 2020, that’s in the middle of the pandemic, we really didn’t get any deep in there. But yeah, this just goes to show you that it’s all fueled by government schemes, first-time owner grants, stamp duty cuts for first-time owners, and other stimulus grants and schemes.

But the point I want to make is that more stimulus and all of these grants are games and just stimulus, more stimulus made higher property prices. 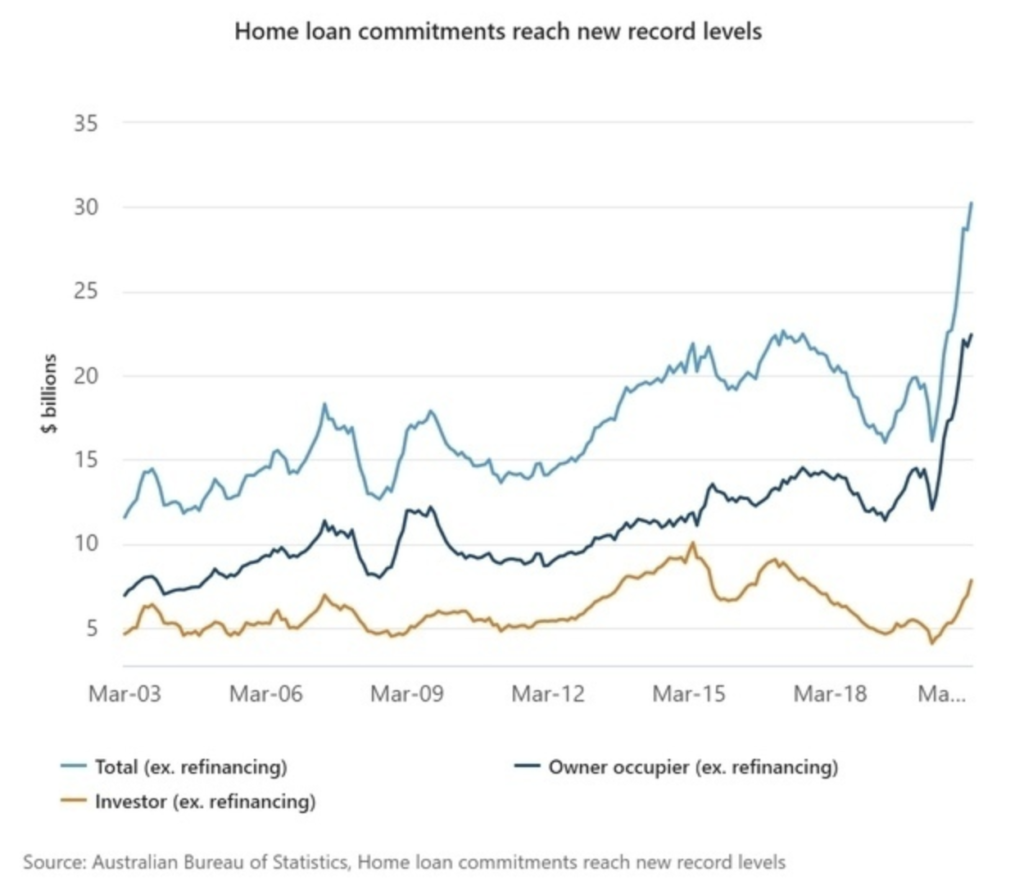 So just to kind of add to more stimulus means higher property prices, locked down number four here in Victoria shows the government, the Victorian Government anyway, they’re going to splash out another 250 million in stimulus, which, you know, you pour money into an economy stuffs got to go up in value. So you can expect properties to keep rising.

On to the broader economy. And this goes on to what I’ve just been talking about with the additional spending, but it goes in a global scale. So if you broaden your mind a little bit, Biden has now basically come out and said he’s gonna spend 6 trillion for this year’s budget for 2022, his budget, which is basically showing you the extra money that’s getting spent.

So I use it as an example. Just so you can understand the level of money printing going on, is that after the GFC, the US government has struggled to get through a bailout package through the Congress or Senate or whatever their parliament is. That bill was for $700 billion. So, you know, pretty much 10 years later, maybe a little bit more, Biden comes out with 6 trillion and no one bats an eyelid. So if you want to understand the level of inflation that’s happening and the level that asset prices are going to rise further, you kind of need to think in those sorts of levels.

That’s my opinion, anyway. Again, no financial advice and backing that up on the broader economy.

I think a lot of people have actually forgotten the sheer amount of infrastructure spending that Victoria are engaging in.

And I say Victoria because all my clients are in Victoria, but really, it’s most of Australia, especially the eastern seaboard states. But I just wanted to actually roll down here and show you one of these graphs or record debt.

This is actually quite a good article. So If you got time, and you’re enthralled by this sort of stuff, go for it. So here we go. So from about 2010 to 2016, the stimulus spending has been around that five or 6 billion a year. Low behold, last few years, we’ve really ramped it up. So 9B, 12B, 13B and 12 billion again, so effectively doubled our infrastructure spending in the last three years. And if you actually look at what’s projected, now it’s 20B, 19B, 20B. Another 20 billion every year. So from literally the last kind of between 2010 to 2017, we’re at about five or six, around that. Yeah, five or six mark. And now, just a few years later, we’re at 20 a year, that’s 400%.

Again, that’s all just printed money that the state government I’m getting this from anyway, they’re borrowing it from us in the future, and the taxpayer has to pay it back. But that actual $20 billion is just created. So they’re just creating all this money and dumping it in the system. So if you want to understand why house prices are just going to keep going up, this is a store of data you need to talk to that’s it for me this week, guys.