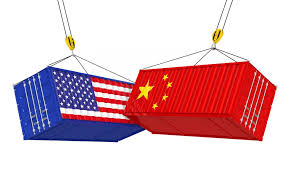 Look out, it’s a war on trade.

We’ve had tumultuous times with America and China still failing to sort their relationship issues in this seemingly never ending war on trade.  All the while, it’s helping the share market look good there’s this dreadful sense that it’s about to all come crashing down.

I saw someone in my network post a question of what the America China war on trade had to do with the Australian economy.

Firstly, tariffs are being put on pretty much everything, so for example if China is sending stuff to the US to sell the US government has now put a tax on what China sells in the US.  Trump claim that this is protecting American business from the point of view that American’s can now produce these goods that China was importing before.

There’s a catch though. And that is that the consumer now pays more for these goods because it actually costs more to make that product in America, otherwise China would not be selling these goods to American’s for cheaper in the first place.

Here’s an assumption you need to make and that has a large element of truth to it.  Everyone lives week to week off their paycheck, this is also applicable to our country also.

Now, if all these tariffs are getting put on and all these expenses are going up then where does the extra money come from.  The reality is extra money doesn’t come from anywhere and eventually defaults on debt starts increasing.

This is where the rot starts, once lenders get scared they stop lending.  Once money becomes harder to find the cost of it starts going up, meaning interest rates increase.

Approximately, 30 -35% of our Australian banks capital is borrowed from foreign debt markets which I’m making an assumption that its mostly from the US.

Previous to the 2 recent interest rate drops some home owners might remember their rates going up twice in the last year prior to that.  That was because of rising interest rates in the US.

This is the most direct way I can see the trade war effecting Australians.

Old PM John Howard came out this week and said our Reserve Bank has pushed rates too low explaining that if there is an actual emergency in our economy then we cannot cut rates much further to provide stimulus to the economy and the people in it.

He has a fair point here.

Added to this the pump up by our government that we have record low unemployment has been thoroughly exposed as the amount of actual full time employment is decreasing, they’ve now coined this term underemployment to describe it.

And when you add this to basically zero wage increases versus living expenses which have increased then this paints are pretty gloomy picture.

I think a big problem with our population is that we’ve been led into a false sense of security that our individual future needs will be taken care of and whilst I agree to a certain extent that that’s the role of our government it in no way means you should believe it.

We’re like a spoilt 18 year old that daddy bought a beamer for.  We have had high job rights, our property prices have increased massively, our super is automatically put away for retirement and to top it off we haven’t seen recession in 26 years.

I know it’s a very Aussie thing to complain, but where’s that gonna get you when your broke?  And the last time I checked hope wasn’t a strategy. Are you going to blame the war on trade?

So my message to all is to take responsibility for your own future because you can be guaranteed that the government will not.

I’ve mentioned this before and I will harp on about it, our society is dividing into 2 classes.  Don’t worry about race, religion, sex, gender or whatever worry about rich versus poor and ask yourself a question.  Which one would you rather your future generations to be because they won’t have a choice.